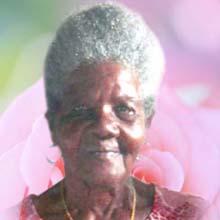 The family wishes to announce the passing of their dearly beloved Paulina James Laurent, also known as Say-e-na, Enna or Ma Keeyan of Jetrine, Saltibus, Choiseul. She passed away at the St Jude Hospital on Friday, July 8th, 2022 at the age of 86 years.

She was predeceased by her husband, Ladislas Laurent also known as Keyan and her nine siblings namely:

Her Sisters in law:

Perina Octave and family of Vijay

Left to mourn are:

The James and Shanan families of Jetrine, Laborie and Babonneau

The Actille families of Jetrine, Castries and Anse La Raye

The Volney and Lionel families of Bel Fond, Soufriere

Many other relatives, friends and members of the Jetrine community too numerous to mention

The funeral service of the late Paulina James Laurent, also known as Say-e-na, Enna or Ma Keeyan of Jetrine, Saltibus, Choiseul will be held at the Church of the Purification of the Blessed Virgin Mary in Laborie on Friday, August 12th, 2022 at 2:30 p.m. after which the families will proceed to the La Tourney Cemetery for internment.

Persons attending the funeral service are reminded to wear their masks and to observe all established protocols.