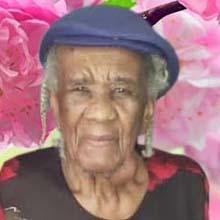 We are deeply saddened to announce the death of Mary Simon, affectionately known as Wen Uma of Laborie, who passed away at her daughter’s, Jeromina Henry residence, on June 15, 2022 at approximately 6:00 am at the age of 89 years.

She was predeceased by her Mother:

Sabina Simon and Edd Simon both resides in Laborie

Kurtrina Rosemond better known as Bebe of Laborie, who was also her caretaker

Marielle Rosemond residing in Ciceron Castries, who was also her caretaker

Gabriel Joseph better known as Gabo and family of Pierrot

George Joseph who resided in the UK and family

Glory James and family of Grace

Family of her deceased brother Ut

The Country and Western Groups

The funeral service of our beloved Mary Simon better known as Wen Uma will be held at the Church of the Purification of the Blessed Virgin Mary, Laborie on Thursday, July 21st, 2022 at 2:30 pm then the body will be laid to rest by her loved ones at the Laborie Cemetery.

The family encourages persons to continue feeling safe by following all the Covid-19 protocols and practice social distancing. The family would also like a touch of red or pink or floral attire to be worn to the service in honor of Miss Mary Simon as she loved La Rose.