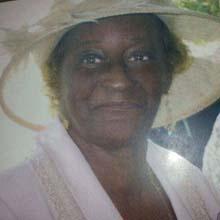 We are saddened to announce the death of our beloved Philomene Mayers also known as Ma-Boy, Mamoy and Dellunah of Cul De Sac. She passed away at the OKEU Hospital on July 19th 2022, at the age of 84 years.

She was pre-deceased by;

Shervon Mayers of the USA

Members of the Grace Baptiste Church in Bexon

Fontenelle Family of the USA

The funeral service of the late Philomene Mayers, also known as Ma-Boy, Mamoy and Dellunah, will be held at the First Baptiste Church Darling Road, Castries on Thursday, August 11, 2022 at 2:00 p.m., and her body will be laid to rest at the Choc Cemetery.

The family regrets to inform that they would like to mourn in private after the funeral.

Condolences to the family o behalf of sister Cecilia and family.