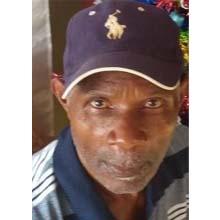 Sylvester Ford also known as Tee-tee, originally from Aux-Lyons who resided at Derniere Riviere Dennery, passed away at his residence on Sunday, June 5, 2022 at the age of 71 years.

Children of deceased brother, Benedict Ford, all of Aux-Lyons

Olive Ford and family of Aux-Lyons

Monica Ford and family of Aux-Lyons

Davidson Ford and family of Aux-Lyons

Charlo of Babonneau and family

Neighbours in the community

Many other relatives both here and abroad too numerous to mention

The funeral arrangements for the late Sylvester Ford also known as Titi, will be at the Dennery Evangelical Church on Saturday, June 25, 2022 at 2:30p.m. The body will be laid to rest at the La Ressource Dennery cemetery.

Transportation will be available from the deceased residence and Aux-Lyons for those who wish to attend the funeral.