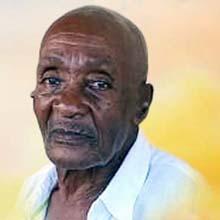 We regret to announce the passing of our beloved Evans Regis Joseph, better known as G-far or G-Popo of Goodlands who passed away on April 24, 2022 at the Villa St. Helen Elderly Home in Dennery. He was 91 years old.

Wilmoth Joseph, all of Antigua

Evon Joseph, all residing in the USA

Boniface Joseph of Castries and

Nicholas Auguste and family of Cul-de-sac

The Auguste family of Goodlands

Ms Pam, both of Goodlands

Other relatives and friends in St. Lucia, Antigua and the USA too numerous to mention

The Management and staff of the Villa St. Helen Home for the Elderly in Dennery

His friends in Desruisseaux and the entire Goodlands Community

The funeral service of the late Evans Regis Joseph, better known as G-far or G-Popo, will be held at Rambally’s Funeral Chapel, Calvary Road, Castries on TuesdayFriday, June 10, 2022 at 2:00 p.m., and his body will be laid to rest at the Choc Cemetery.