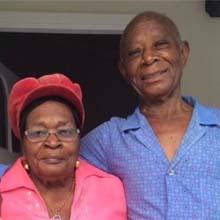 With great sadness we announce the loss of our mother and father, husband and wife Joseph and Marie Theodule.

Joseph Theodule better known as Morris of Aux Lyon, Dennery passed away on Friday January 7th 2022 at about 3:15 p.m. at the Victoria Hospital. He was 90 years old.

His wife Marie Theodule better known as Feo of Aux Lyon, Dennery also passed away on Monday January 10th 2022 at about 2 p.m. She was 91 years old.

They left to mourn:

Lyton and Brian all of England

Cindy and Jeanelle of Puerto Rico

Arabella and Jennifer all of England

Wildy and Alexander of Puerto Rico

Luca and Kaia of England

Sinna and Florina of Aux Lyon

Persons attending the funeral service are asked to adhere to all protocols established for Covid-19.

May their souls rest in eternal peace!

Condolences to my cousins from Mary and the girls

My deepest sympathy goes out to Jennita and her entire family on the sad loss of her parents. May they both rest in eternal peace. Thinking of you all at this sad time x

My condolences and prayers go out to all my Nenan's family. May they both rest in peace.