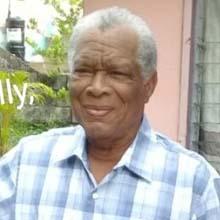 Mr Joseph Gregory Sonnyboy Michel Daniel of Garrand, Babonneau has saluted this world and bowed out to rest in sleep after journeying through a long and turbulent medical journey. He was 85 years old.

The funeral arrangements for Joseph Gregory Sonnyboy Michel Daniel will be announced in a subsequent broadcast.

May his soul rest in peace.