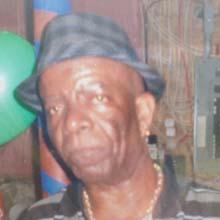 It is with profound sadness and heavy hearts that the Mitchell family announce the death of Joachim Allan Mitchell, son of the late Joseph Arundel Mitchell and Marie Angela Mitchell, and brother of the late Martinus Mitchell Saltibus.

Joachim was a beloved son, grandson, nephew, brother, uncle, cousin, father and grandfather of Belfond, Soufriere. Joachim also known as “T-Allan” passed away on Thursday, January 13, 2022, in Soufriere at approximately 8:00am.

Ryan Louisy of Belfond and

Ian Bisette of Monchy and

Domina Jones and Julie Watters all of Baytown Texas

Mathew Sabbath Saltibus and his wife Marcella Saltibus residing at Wingsville, Soufriere, and family in Vieux Fort and in the US

Mary Yola Stevens and family residing in Trinidad, England and the US

Lucia “Ricksee” Combie and family residing in St. Croix and in the US

Ariscia Louis and family residing in Baytown and Houston

Joan ‘June’ Medard and family residing in Baytown and Houston

Josephine Mannuzie in the USA

Anthony Bisette of Ciceron and

Johannes Mitchell, all residing in Texas

Dale Joseph all of Soufriere

Jamala and Victoria Mitchell all residing in Texas

Several cousins among who are:

Lydia and Nancy Elliott and families in Castries

The Michel family in Belfond, Chateau Belair, and Choiseul

The St. Aimiee and Cenac families in Soufriere

The Blasse family of San Souci, and New York

The Charles and Augustin family of Belfond

The Didier family of Belfond and Chateau Belair

The Haynes family of Castries, England and Anguilla

The Alfred family of Soufriere

Adela Henry who was his caregiver in Belfond

All the Families with roots on “The Bombay” Soufriere

Aaput, Bousquette, and other friends in Belfond, Fond St. Jacques, Soufriere, Choiseul, Laborie and beyond

The funeral service of Joachim Allan Mitchel will be held on Thursday, January 27, 2022, at the church of Our Lady of The Assumption Soufriere at 2:00 pm. The body will be laid to rest at the Soufriere Cemetery.

May His Soul Rest In Peace