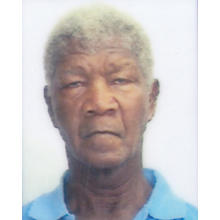 We regret to announce the death Joseph Joseph also known as Mishel and Juice of Bacadere, Vieux-Fort. He passed away at OKEU Hospital on Saturday, October 30th, 2021. He was 72 years old.

He left to mourn:

Seven (7) Grandchildren all residing in France

Also left to mourn other relatives including:

The Fontenelle families of Vigier, Micoud, Blanchard and Castries

The William family of Vigier

The Langellier families of Belle Vue, Blanchard and Vieux-Fort

The Samuel family in Vigier and Pierrot

The funeral service of the late Joseph Joseph also known as Mishel and Juice of Bacadere, Vieux-Fort will be held at the Victory Pentecostal Church on St. Jude Highway, Vieux-Fort then his body will be laid to rest at the La Tourney Cemetery.