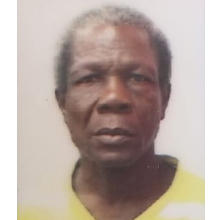 We are saddened to announce the death of our beloved Laurie Peter Williams better known as Scrape of Lewis Street, Vieux Fort who passed away at the St. Jude Hospital on Saturday, October 23rd, 2021. He was 72 years.

The Brown family of La Ressource and Brooklyn

The Peters family of Vieux Fort

Anne and friends on the block

Other friends and neighbors from Lewis Lewis Street, Vieux Fort too numerous to mention

The funeral service of the late Laurie Peter Williams better known as Scrape will be held at Our Lady of the Assumption Catholic Church, Vieux Fort. His body will be laid to rest at the La Tourney Cemetery.