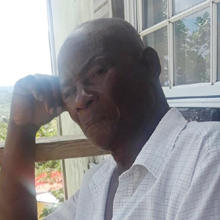 Gilbert Estanio, better known as Adrérom of Aux-Lyon, passed away at the Victoria Hospital on Monday September 27, 2021 at 3:30 p.m. He was 78 years old.

Victoria Henville, all of Aux-Lyon

Dashun and Dorien Lawrence of Despin

Judith and family of Aux-Lyon

Loticia and family of Aux-Lyon

The funeral service for the late Gilbert Estanio better known as Adrérom will be held at the St. Michael’s R.C. Church at La Ressource and then his body will be laid to rest at the La Ressource Cemetery.

The family informs persons attending the funeral service to adhere to protocols established due to Covid-19. Please maintain social distancing and wear your masks.