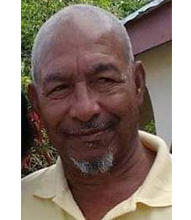 We are saddened to announce the passing of our beloved Lucius Baptiste of Cedar Heights Vieux Fort. Better known as Owah, he was a husband, father, brother, grandfather, uncle, cousin and friend. He was 67 years old. He was the son of the late Stephen Montrose of Water Works Road of Castries and the late Vida Baptiste Louis of Richfond, Dennery and his late step mother Annie Montrose of Entrepot Castries. He was formerly from Water Works and Entrepot. He was a former employee of Cable and Wireless Branch in Vieux Fort. He passed away at the St. Jude Hospital on the 30th of September 2021 at 5:25am.

His beloved, faithful and caring wife of 43 years who was his caretaker:

Marcus Baptiste employee of SLASPA on the Docks Vieux Fort

Hannibal St. Claire of the USA

Nysa Staton of the USA

Pearl Staton of the USA

McQuan Antoine of the Smiles of Smiles Preschool

Renard Staton of the USA

Lorry Louis and family of Richfond

Cynthia Belfon and family of Canada

Annette Duboulay and family of Canada

Pandora Mason of Corinth and family

Yoland Warner and family of Canada

Josephine Alexis and family of London

His neighbors in Cedar Heights

The funeral service for the late Lucius Baptiste will be held at the Seventh Day Adventist Church in Vieux Fort. His body will be interred at the La Tourney Cemetery.

Please note that all Covid-19 protocols will be in full effect.