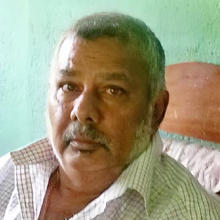 Sadly we announce the death of a loving husband, father, brother, uncle, cousin and friend, David Joseph better known as ‘Lawtoo’ or ‘Bolo’ from Anse-Ger, Desruisseaux who passed away on Tuesday, September 28th, 2021 at the St. Jude Hospital. He was 69 years old.

Seventeen (17) Nieces and Nephews including:

Eileen Pierre and family residing in the UK

Janey Soolal also known as Alphia from Marc and family

Five (5) Brothers in law including:

Alexis Samuel also known as Latch from Anse-Ger and family

Daphney and Leo of Anse-Ger

Lenny also known as One Hand from Desruisseaux

Friends and family too numerous to mention including:

The Kisna family of Anse-Ger

The Sammy family of Anse- Ger

The Kangal family of Micoud, Savannas Bay and Ti-Rocher

The Ragoonanan family of Belle-Vue

The Paul and Kadoo family of Augier

The family would like to thank all well-wishers for their prayers and contribution during this time of bereavement but would like to mourn in private following the burial.

May he rest in perfect peace.