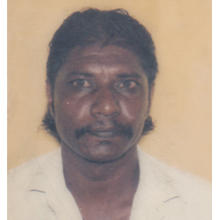 It is with deep sadness that we announce the death of our beloved Augustin Emmanuel also known as Joke or Seagal of Balca, Saltibus who resided in Banan, Cul De Sac. He passed away at his residence on Friday, September 3rd, 2021. He was 69 years.

Left to mourn his passing are;

Shane Edward, both of Balca

Johana Simon and family of Boston

Patsy Hippocrat and family of Martinique

Ketra Simon and family of Balca

Edward Simon, all of Balca

Renee and Martha and their families of Jacmel

Catherine and Albertha and their families of St. John

Clayton Simon and family of Balca

Preston Small and family of Balca and St. John

Many cousins, relatives and friends too numerous to mention including: Lera Simon better known as Vorlyn and family of Balca

The Simon and George families of Balca and Forestiere

The funeral service of the late Augustin Emmanuel also known as Joke or Seagal will be held at Rambally’s Chapel, La Tourney, Vieux Fort. His body will be laid to rest at the La Tourney Cemetery.

The family would like to mourn in private after the funeral service. Also all Covid-19 protocols must be observed by funeral goers.