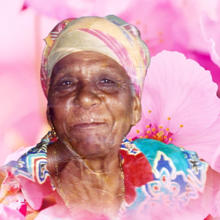 We the Hubert family are saddened to announce the death of our beloved mother, grandmother, aunt and sister, Berthelina Hubert also known as Lina or Ma Morriel; formerly of Belle Vue, Vieux-Fort but resided in Blanchard, Desruisseaux during the time of her passing; she passed away peacefully at the St. Jude Hospital on Sunday, September 27th, 2020 at about 2:45 a.m. She was 96 years old.

She was predeceased by her husband Paul Hubert also known as Morriel of Blanchard, Desruisseaux

Predeceased by her Sisters:

Predeceased by her Brothers:

She leaves to mourn:

Jazmine of the U.S.A

Fairness Tobiere and family of Desruisseaux

Jeremiah George and family of USVI

John Neptune also known as Meroy and family of Blanchard

Bryan Skelly and family of Dennery

Patricia Hubert and family of Blanchard

Many God Children including:

Julianna Erysthee of Blanchard, residing in the USA

Also left to mourn are the:

The Blanchard Mothers and Fathers Group

Many other relatives and friends in BVI, USVI, USA, Aruba,

Martinique and St. Lucia too numerous to mention

The funeral mass of our beloved Berthelina Hubert also known as Lina or Ma Morriel of Belle Vue, Vieux-Fort but resided in Blanchard will be held at the Holy Cross Parish Church in Desruisseaux on Saturday, October 17th, 2020 at 10:00 a.m. then the body will be laid to rest immediately after at the Desruisseaux Cemetery.

All Protocols Due to Covid 19 will be observed