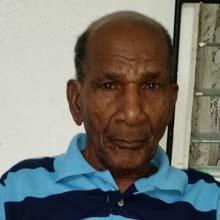 It is with profound sadness that we announce the passing of our beloved Benedict Felix also known as Elick, Joy or Uncle Tot who passed away at the OKEU Hospital on July 19th, 2020 at approximately 5:30pm. He was

He was pre-deceased by:

Nieces and Nephews including:

Both Here and Abroad

Dr.Imran Forde and the Nurses on Ward AGW 2 at the OKEU Hospital including:

Many other relatives and friends too numerous to mention.

The funeral service of the late Benedict Felix also known as Elick, Joy or Uncle Tot will be held at the Rambally's Funeral Parlour Chapel on Thursday, July 30th, 2020 at 10:00am.

His body now lies at the Rambally’s Funeral Parlour, Calvary Road, Castries May the soul of our beloved rest in perfect peace!

The family would like to mourn in private after the funeral service.

Sincere condolences to the Felix family .What a blessing to had him with you for many years. May your hearts be filled with wonderful memories of joyful times you shared together as you remember a life well lived and loved by many Psalms 90:10