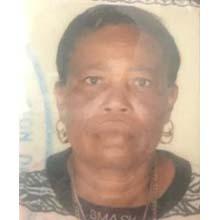 With heartfelt sorrow we announce the passing of our beloved Paulina Joseph, also known as Miss Pearl of Banard Hill, Castries who passed away at her residence in Brooklyn, New York on Sunday, May 10, 2020.

The Richardsons and family of Tortola

Yvonne Nelson, Janette Duplessis, Manners and family and Mario Smith, all of Tortola

Other relatives and friends here and abroad

The funeral service for the late Paulina Joseph, also known as Miss Pearl, will be held at the Minor Basilica of the Immaculate Conception on Monday, August 10, 2020 at 2:30 p.m., and then her body will be laid to rest at the Choc Cemetery.

Persons attending the funeral service are asked to follow protocol established in keeping with COVID-19.

May her soul rest in eternal peace

May god give your family the strength to be able to endure the sadness. I pray god wipe away your tears and that you all remember her and always smile.