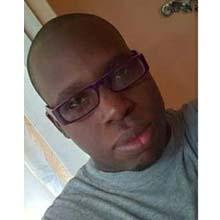 It is with great sadness that we announce the death of a beloved son and brother, Lauriston Annius, affectionately known as Aervel and Cheng of Goodlands who passed away at the OKEU Hospital on Tuesday, June 16, 2020 at 11:41 p.m. at the age of 32 years. He was employed with the Royal Saint Lucia Police Force and by extension the Royal Saint Lucia Special Reserve of which he was a member.

Marverly Annius of Good-lands, employed with Fix-It Garage in Bexon

Lucilla Turton who resides in Barbados

Rosemarie Gosslin who resides in France

Sheraline Alexander who resides in Martinique

Joseph Alexander, Matthew Auguste and Callixtus Alexander, all of Good-lands

Veronica Alexander who resides in Martinique

Taurean Turton who resides in Barbados

Tessa Annius and family of Good-lands

Michael Annius and family of Babonneau

Sandy Annius and family of Good-lands

Sophia Annius and family of Good-lands

The rest too numerous to mention

Peter Auguste, Julian Alexander and Moses Alexander, all of Good-lands

The youth of the Bocage SDA Church

Pastor Leonce and family of the Morne

The staff of the Police Press Office, Bicycle Patrol Unit and Guard Hut

The funeral service for the late Lauriston Annius, affectionately known as Aervel and Cheng, will be conducted at the Seventh-day Adventist church, High Street, Castries on Monday, July 13, 2020 at 2:00 p.m., and then his body will be laid to rest at the Choc Cemetery.

The family appreciates well-wishers support but would like to mourn in private after the funeral. Please wear a touch of blue.