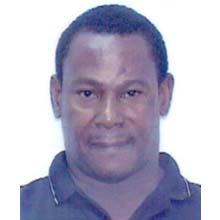 It is with broken hearts and deep sorrow that we the family announce the passing of our beloved son, brother, friend and associate, Matthew Biscette also known as wellix, B, Mr B or Fox who passed away at his residence Ti Roche Castries, on June 17, 2020. Left to mourn:

Damian Biscette of the Morne Castries

Also left to mourn are:

The Felix family of La Pointe, Jacmel and Castries

The Charlemagne family of La Pointe

The St Prix Family, all of La Pointe, Castries and abroad

The Simon family from Forestere

His friends at Foresters and Ti Roche

Matthew was well known throughout St Lucia and had friends in all facet of the island. He will be greatly missed

The funeral service of the late Matthew Biscette will be held at the Cathedral of the Emaculate Conception on Thursday, July 02, 2020 at 2.30 p.m and then the body will be interred at the Choc Cemetery

May the soul of our beloved rest in eternal bliss

Due to the covid pandemic please be guided accordingly; masks are required and keeping in practice with social distancing the Cathederal can only hold one hundred and fifty persons

Sabinus, Biggar and lelia from Miami.

We enjoyed the time you spend with us in miami.You will surely be missed expect our condolences.

You will be missed dearly

From Sabinus,Biggar,lelia accept our condolences. You will be missed

Rest in peace my uncle

Rest in peace my uncle....you will be missed

Rest In Peace my brother. I love you.