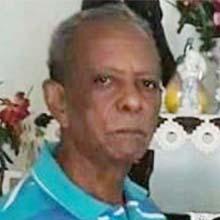 With profound sadness we announce the death of Eustace Didier better known as “Etay” or “Life To Go” of Jetrine, Saltibus who passed away at the St. Jude Hospital on Monday, June 1st, 2020 at 10:18 p.m. He was 80 years old. He was a member of the Saltibus Couples for Christ.

He was predeceased by his former partner:

June Charles and his daughter Simone Charles both of Jetrine

His Cherished Grandson and Caretaker:

Nixon Louis and family; a Pastor in Montserrat

Brice Samuel and family of Monchy

Regina Didier and family of Jetrine and New York

Theresa John and family of Londonderry

Eldrina Didier and family of Jetrine and New York

Children of his deceased sister Odette Didier and their families of La Ressource, Vieux-Fort

Johnny Frederick and his wife Lina in the UK

His Brothers and Sisters in law in Darban, Castries, Miami and the UK

Gregory Alfred and family of Castries and Canada

Lina Louis and family of Piaye

Ma Cool-aid and family of Saltibus

Members of the Saltibus Couples for Christ

Members of the Saltibus Church Choir

Staff of the Saltibus Wellness Centre

Numerous other nieces, nephew including Tony, Natty and Paul Didier and Kenny Andrew;

Other relatives and friends to numerous to mention

The Didier families of Jetrine, Soufriere, Castries and abroad

The Hippolyte families of Darban, Micoud, Castries and abroad

The Charles family of Jetrine

The Carasco families of New York

The Edward families of Jetrine

The Francis families of Jetrine and Lamaze

The funeral service of our beloved Eustace Didier better known as “Etay” or “Life To Go” of Jetrine, Saltibus will be held at the Church of St. Theresa of the Infant Jesus Roman Catholic Church in Saltibus, on Friday, June 19th, 2020 at 3:30 p.m. then the body will be entered at the Saltibus Cemetery.

Please Note: Due to the current global pandemic all COVID-19 protocols will be observed and practiced; persons attending the service please ensure those face mask are worn. Thank you for your kind co-operation and understanding.

Also the family expresses their gratitude and thanks to everyone who assisted and supported them during this difficult time, but they would also like to mourn in private after the funeral service.

The service will be viewed live on Channel 115 G.V.D and G.V.D face book page

May his soul rest in perfect peace