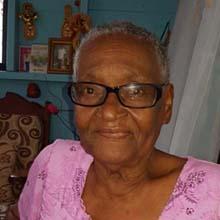 Veronique Edmund, also known as Mona of Arundell Hill, Marchand, passed away at her residence on Monday, May 25, 2020 at the age of 88 years.

Kendall Brouet, all residing in Canada

Kyle and Kaalen Long both residing in New York

Julienne Brouet of Lamaze and

Marcellina and Gayle Brouet in Antigua

Ricky Herman and family of Ciceron

The Brouet family in Choiseul, Castries and abroad

The Descartes family of Lamaze Choiseul

The Plante family of Choiseul, Castries and abroad

The Labadie family of Choiseul, Castries and abroad

The funeral service for the late Veronique Edmund also known as Mona, will be conducted at the Maranatha Seventh-day Adventist Church, Lanse road, Castries on Monday, June 8, 2020 at 10:00 a.m., and then her body will be laid to rest at the Choc Cemetery.