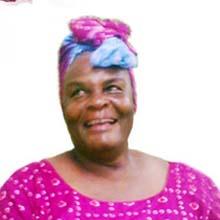 We the Moncherry and Small family would like to announce the death of Theresa Moncherry-Small, originally from Blanchard Desruisseauxd, who passed away at her residence at Ravine Poisson on Monday, May 27, 2020 4:00 a.m. She was 62 years old.

5 Nephews and 6 Nieces including:

Selwa Williams in the USA

Marguerita Gittens better known as Peggy, all of Barbados

Children of her deceased uncles:

Children of her deceased aunts:

Deacons and Deaconesses of the Zion SDA Church

The Community of Blanchard Desruisseaux and Ravine Poisson

The funeral service for the late Theresa Moncherry-Small, better known as Emiltrude will be conducted at the Zion Seventh-day Adventist Church, Ravine Poisson on Sunday, June 7, 2020 at 2:00 p.m., and then her body will be laid to rest at the L’Abayee Cemetery.

You won't be forgotten. Rest in Peace. The King of all kings will soon come and death will no longer have power over us.

Wait a while, it will soon be over, and we will meet again.

Missed but not forgotten.