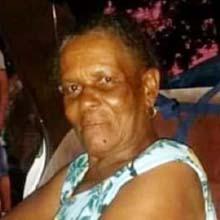 We regret to announce the death of our beloved mother, sister and partner Verona Francis better known as Florine, Aidwallin or Aysay of Jetrine, Saltibus. She departed this life on Monday 11th May, 2020 at the age of 69.

Sabina Francis of Daban and family

Francisca Francis and family of Bexon

Her Thirty-Seven (37) grandchildren including:

Four (4) Daughters in law including:

Angel and Beatrice Burin and family of Martinique

The Moses family of Saltibus

The Flavien family of Laborie

The Marcellin family of Cantonment

The Francis family of La Haut, Berange and Jetrine

The bus drivers on the Saltibus/ Vieux Fort Bus Stand and

Many more relatives and family both here and abroad that are too many to mention.

The funeral service for our beloved Verona Francis better known as Florine, Aidwallin or Aysay of Jetrine, Saltibus will be held at the Church of St. Theresa of the Infant Jesus Roman Catholic Church in Saltibus, on Thursday, May 28th, 2020 at 3:30 p.m. then the body will be laid to rest at the Saltibus Cemetery.

In honor of Miss Verona the family kindly request that attendees wear a touch of red to the service, thank you for your kind co-operation.

May she rest in peace