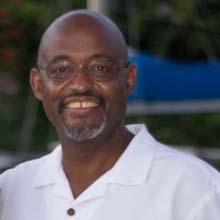 It is with deep sadness that we announce the death of Eric La Force better known as HOG of Carellie, Castries. Who passed away at the Owen King EU Hospital at 7.02 p.m. on Tuesday, May 12, 2020. He was 53 years old. He was also an employee of Royal Caribbean Cruise Lines.

Garvin Martelly of the USA

Ronniesha Scott both of Rockhall

Allisa Charles-Findley residing in the USA

Martin and Anselma Fevrier in the USA

The management and staff of the Royal Caribbean Cruise Line

The funeral arrangements of the late Eric La Force better known as HOG, will be held at the Minor Basilica of the Immaculate Conception in Castries, on Wednesday, June 3rd, 2020 at 2:00 p.m. His body will be interred at the Choc Cemetery.

The family would like to inform extended family members, friends and well-wishers that in keeping with the Government of Saint Lucia's protocol requirements due to Covid 19; social distancing regulations will be put in place and only a limited number of persons will be permitted to attend the funeral service. Also due to the protocols established the family will be mourning in private after the funeral service.