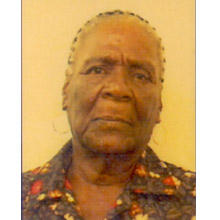 It is with profound sadness that we announce the death of Marie Augustin also known as Charlisya George of L’abayee Bexon, who passed away at her residence on Monday, February 24th, 2020. She was 94 years old.

Helen Augustin in the USVI

Velina George and Marie Celina Augustin, both in Martinique

Richie Edward, all residing in Martinique

Victor Hector Jr., all in the USVI

David Kenny Augustin in the USVI

Hector Dadoo, both in Martinique

Blanchard Francis better known as Brian and family of Richfond

Mary Sexius and family of Bexon

Norvilla Lewis and family of Choiseul

The Pierre-Louis and Prospere family of Soufriere and Castries

The Prescott family of Anse-la-raye and France

Etta and family of Ciceron

The members of the St. Martha Society Group of the Bexon R.C. Church

The funeral service for the late Marie Augustin also known as Charlisya will be conducted at the Most Pure Heart Of Mary Roman Catholic Church in Bexon on Friday, March 6, 2020 at 3:00 p.m., and then the body will be laid to rest at the Bexon Cemetery.

Please note: transportation will be available in the Bexon, Sarrot and Ravine Poisson areas to transport persons to and from the funeral.

May Her Soul Rest In Perfect Peace.