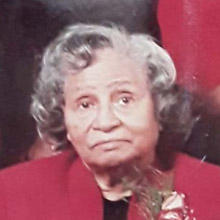 Floritta Nelson, better known as Aunty Maude or Ma Boy of Bexon who resided for some time in the United States, passed away at her son’s residence in Monier, Gros-Islet on Wednesday, February 12, 2020 at 4:00 p.m. She was 98 years old.

Joseph Nelson, RN, all of the US

Many Nephews and Nieces including:

Nehemiah Moore of Ravine Poisson and the US and family

Children of deceased sister, Agnita Preudhomme of Bexon and their families

Children of deceased sister, Petrona Joseph of Ravine Poisson and their families

Children of deceased sister, Agatha Charles of Bexon and their families

Children of deceased brother Clive Adolph of Bexon and their families

Many other relative and friends

The funeral service for the late Floritta Nelson, better known as Aunty Maude or Ma Boy, will be conducted at the Seventh-day Adventist Church, High Street, Castries on Sunday, March 8, 2020 at 2:00 p.m., an then her body will be laid to rest at the Choc Cemetery.

Be not dismayed God will take care of you.

I will never leave you nor forsake you.   Jesus is true to His promises: so be comforted by these words.