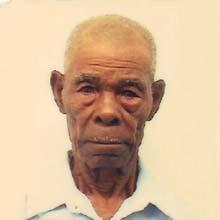 Marie Fitz Wilfred, better known as Fitz Phillip of La Croix Maingot, passed away at his daughter’s residence at Paix Bouche Babonneau on Tuesday, September 29, 2019 at the age of 96 years.

Delphia Sharpe, better known as Shanan of the United Kingdom

Maureen St. Omer in the US

Lyncan St. Omer in the US

Thomas Herman, Driver on the La Croix Maingot Route who was also his Caretaker

The funeral service for the late Marie Fitz Wilfred, better known as Fitz Phillip, will be held at the Seventh-day Adventist Church at La Croix Maingot on Sunday, October 13, 2019 at 2:30 p.m., and then the body will be laid to rest at the Jacmel Cemetery.