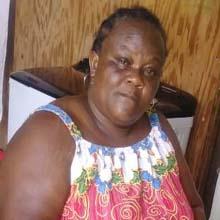 It’s with a profound sadness that we announce the death of Henrietta Felix Mathurin better known as Tartar of Anse Ger, Desruisseaux, who passed away at her residence on Wednesday, September 18th, 2019.

She was pre-deceased by her mother Pricillia Felix

Left to mourn her passing is her husband:

Juliana Felix and family – employed with the Ministry of Agriculture; both residing in Anse Ger

Savia Thomas who was also her niece of Anse Ger; employed with the Ministry of Agriculture

The Boy, both residing in Anse Ger

Her driver Hilary Neptune of Blanchard

The Richard and Ferdinand Family of Anse Ger

The Clerice family of Laborie and Anse Ger

The Henry family of Paiye

The Harry and Chastanet Family of Dennery

The Celestin Family of Dennery

The Cooper Family of Anse-Ger

The Estephane Family of Dennery

The thanksgiving service in celebration for the life of Henriertta Felix Mathurin better known as Tartar will take place on Saturday, October 5th, 2019 at 3:00 pm at the Faith Tabernacle Pentecostal Church, Micoud, and then the body will be laid to rest at the Desruisseaux Cemetery.

Please note that transportation will be provided for persons wishing to attend the funeral service. Buses will be parked at the Anse Ger Secondary School gap and next to the Anse Ger playing field.

May her Soul rest in Perfect Peace.