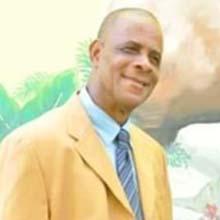 We are saddened to announce the death of our beloved Vincent Quinson Nelson, also known as Afarice and Brayzo of Aux-Lyons Dennery, passed away at the Victoria Hospital on Wednesday, September 18, 2019 at 6:30 a.m. He was 65 years old. He was a farmer at Aux-Lyons.

Charles Thomas also known as Charlo and family of Babonneau

Lambert Smith and family of Despin

Baptiste Cassius and family of Aux-Lyons

Coren Marcel and family of Aux-Lyons

The funeral service to celebrate the life of Vincent Quinson Nelson will be held at the St. Michael’s Roman Catholic Church at La Ressource, Dennery on Saturday, October 12, 2019 at 2:00 p.m., then the body will be interred at the La Ressource Cemetery.