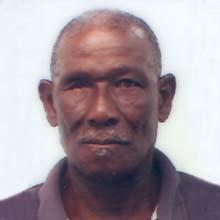 It is with our deepest sorrow that we announce the passing of Richard Frederick, better known as Ritchie or Uncle, originally of Barre Denis but at the time of his passing, resided at Odsan. He passed away at the Victoria Hospital on Sunday, September 8th, 2019 at 10:45 p.m. at the age of 70 years. He was a past employee of Hess Oil, and Concrete And Aggregate and a member of the Barre Denis United Mothers and Fathers Group.

His son Kim Gustave of Odsan

Left to mourn are:

Malcolm Andrew all of Barre Denis

Keya and Shakira John of Odsan

Travis Frederick and D’Anthony Parsley both of Canada

Kenious and Deona, all of Barre Denis

Edric Mitchel and family, all of Barre Denis

Felina Darcie and family, all of Barre Denis

Veronica Jouavel and family of the US

Lucianna Poleon and family in Atlanta

Joseph Jouavel and family of England

Nicholas John, all of Odsan

Lisa and Rose, all of Odsan

The John family of Odsan including:

The Gustave family of Odsan

The entire community of Barre Denis and Odsan

The funeral service for the late Richard Frederick, better known as Ritchie or Uncle, will take place at the Minor Basilica of the Immaculate Conception on Friday, 27th September, 2019 at 2:30 p.m., and thence to the Choc Cemetery for burial.

Transportation leaves Odsan, Barre Denis, and La Croix Maingot at 1:30 p.m. to transport persons to and from the funeral service.

A collection will be taken for the upkeep of the church

May his sweet soul rest in perpetual peace.