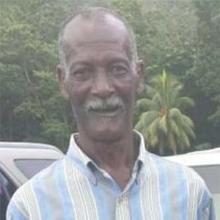 It is with profound sadness that the family of Henry Joseph Monlouis affectionately known as “Tepap”, of Sarrot, announce his passing on Tuesday 3rd September 2019 at approximately 7:00 p.m. at the Victoria Hospital at the age of 77 years.

He was predeceased by his grandson Vick Denis who died tragically in Sarrot.

Left to celebrate his life is:

Mary Monlouis AKA Veronique of Sarrot

Suzanna Monlouis of the USA

Sadi Denis of Sarrot, Nurse at the Victoria Hospital

Sherwin and Rahim Marius of the USA

Lucia William and family of Sarrot

Martin Louis AKA Matthew of Vanard

Valencia Florent of the USA

Kerian Marius of the USA

Sylvia Pierrot of the United Kingdom

John and Appy of Sarrot

Family of his deceased uncle Peter Justin of Arundel Hill

Family of the late Ernest of Bois Patat

The Melchoir, Dositay and John Family of Bexon and Babonneau

The Cherry Family of Bexon

The Daniel Family of Sarrot

Andrea Clarke AKA Tifi of Sarrot

Monica Hippolyte and Family of Sarrot

The Holy Name Group of the Most Pure Heart of Mary

The entire Sarrot Community, too numerous to mention.

The Funeral Service of the late Henry Joseph Monlouis better known as “Tepap” will be held on Thursday, 26th September, 2019 at the Most Pure Heart of Mary, Bexon, from 2:00 p.m. The body will then be interred at the Bexon Cemetery.

May he rest in peace

Please accept my sincerest condolences at his  passing.  May his soul fest in peace

Love you daddy. See you in the new earth. BEST DAD EVER!!!:)