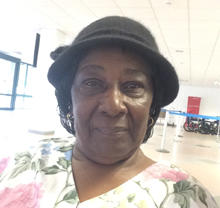 We are saddened to announce the death of our beloved Rita Vitalis also known as Miss Leon of Reunion Choiseul, who passed away at the St. Jude Hospital on May 6th, 2019. She was 76 years.

The funeral service of the late Rita Vitalis also known as Miss Leon will be held at the Victory Pentecostal Church, St. Jude’s Highway, Vieux Fort on Friday, May 24th, 2019 at 3:00 p.m. Her body will be laid to rest at the La Tourney Cemetery.